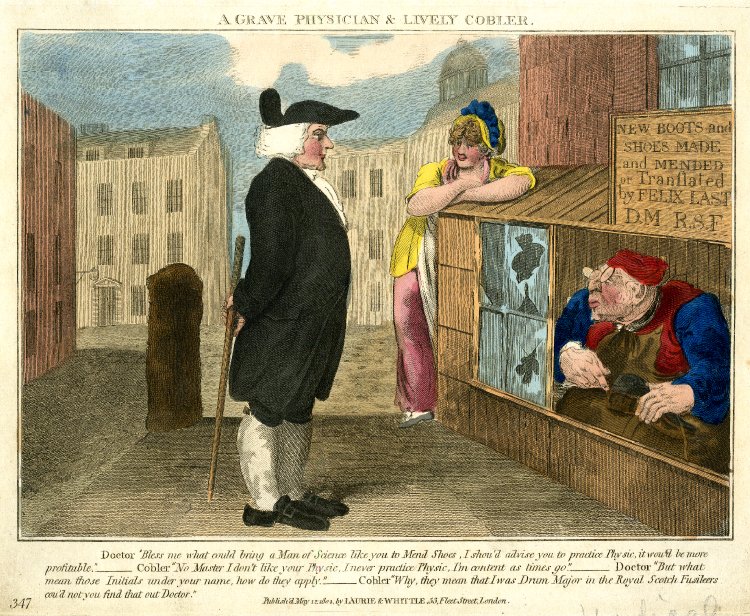 In the 1804 London satirical print, ‘A grave physician & lively cobler’ (pictured above), a doctor humorously mistakes humble tradesman Felix Last for a Fellow of the Royal Society. Eyeing the post-nominals emblazoned above the cobbler’s booth – D.M. R.S.F. – the perplexed physician asked the bespectacled cobbler ‘what could bring a man of science like you to mend shoes[?]’ The doctor urged Last to put his education to ‘more profitable’ use by taking up a medical career, prompting the shoemaker to clarify that he knew nothing of ‘physic’; the initials actually signified his former service as a drum major in the Royal Scotch Fusiliers.[1]

Another version of this anecdote appeared in The Gentleman’s Magazine in July 1809. As a correspondent calling himself Cacafogo (Spanish for braggart or fire-sh*tter) complained: ‘so universal is the mania for self-dignification, that, some time ago, in one of my ambulatory excursions, passing through a village in Wales, I observed painted on a board in front of a raccomodeur’s [clothes-mender’s] stall…“Solomon Sheers, M.B.M.D.M.A.” I own my astonishment was roused, and my curiosity keenly excited, at seeing these indiciæ of academical honours, so inapplicable to [the] appearance of the bode and its inhabitant, and therefore easily sought a solution to the enigma; when the knight of the thimble courteously informed me that it denoted him to be a breeches-maker, and also drum-major to the Anglesea Militia.’[2]

According to the disapproving correspondent, the tailor-cum-drum-major’s generous helping of post-nominals was symptomatic of a wider scourge of social climbing, with vulgar parvenus putting on airs and eroding what he considered to be the natural order of society.

Of course, the satirical names employed in both the print and the magazine submission cast doubt on the anecdote’s veracity. ‘Cacafogo’ aside, ‘Solomon Sheers’ presumably alludes to the scissors essential to a tailor’s trade, while Felix Last’s surname surely references the wooden forms used by shoemakers.  But fact or fiction, the joke – simultaneously lampooning academic pretensions and ridiculing drum-major-cobblers for getting too big for their boots – enjoyed lasting appeal. A very similar story was recounted by Thomas Geering (1814-1889) in his 1884 reminiscences of nineteenth-century life in Hailsham, Sussex: ‘Here is another trade joke. A facetious cobbler, who had been a soldier, and settling down in one of our small towns in the neighbourhood, put on his board over his shop-door following his name, “F.R.S.” Soon after he was visited by a stranger, a gentleman, who, offering his hand, feelingly inquired how it happened that a Fellow of the Royal Society should be found in so humble a position; but the man readily explained that he knew nothing of the Royal Society nor its letters. He had only, he said, initialed his last profession as Fifer in the Royal Surrey [Militia], and as he hoped the letters would attract attention and bring him customers, he did not feel disposed to alter the sign.’[3]

Whatever the truth of these amusing stories, they certainly capture the considerable pride taken by Napoleonic-era veterans in their wartime service, be they seasoned Peninsular men or former weekend warriors of the local volunteers. Moreover, I know of one verifiable (if rather more melancholy) instance of a drum-major appending the initials of his rank to his signature. Drum-Major William Washer of the Canadian Fencibles attended the 1812 funeral of James Faulkner, the three-month-old son of a black regimental bandsman, and signed his name as a witness in the Sorel parish register as “Wm Washer DMCR” – Drum-Major, Canadian Regiment.

[1] Strictly speaking, no regiment of this title existed during the early nineteenth century. The Royal Scots Fusiliers were then known officially as the 21st (Royal North British Fusilier) Regiment of Foot, North British being a synonym for Scottish.

[2] The Gentleman’s Magazine (July 1809), p. 608. The anecdote was repeated in The Cambrian newspaper on 26 August 1809: “In the front of a tailor’s shop, in North Wales, is a board with this dignified inscription: – “SOLOMON HUGHES, B. M. M. D. M. A.” which the owner interprets, Breeches Maker and Drum Major to the Anglesea Militia.”

View all posts by Eamonn O'Keeffe